It was a notion from two former Jiu Jitsu teammates that deadlifting 500lbs is a sign ‘you’re pretty strong’ and a worthwhile goal. This was ~2013. Thanks to my Canadian buddies Erik A.and Michele B. for the idea.

For the first time since starting Jiu Jitsu in 2005, I’m not doing Jiu Jitsu. Most strength programs require 5-6 days a week of dedicated lifting, which is fine until you throw in 3-4 days of hard to really hard mat time. I simply don’t have the physical resources to do Jiu Jitsu and a dedicated lifting program and expect results from both. From my 2010 experiment of doing Crossfit + Jiu Jitsu, I found I ended up 100% shot all the time and degraded at both. Too much was too much, and my body/joints/mood/progress suffered as a result.

Since my 2020 mat time has dropped to zero, I can take a pure strength program for a test drive. Note this is not a size/hypertrophy program, the goal is raw strength.

I have the luxury of a pretty full featured garage gym and nowhere to go.

The ‘Easy Strength’ program has fascinated me for years. Might as well give it a shot.

What is Easy Strength?

The Easy Strength program by Pavel and Dan John

5 days a week, do 10 quality reps of each exercise

There are several versions of this program floating around the internet(t-nation, etc) I used a recent(2020) iteration. Dan John’s Easy Strength Workshop(Youtube).

On paper, this seems far too simple to work.

I am a bit skittish of something going ‘pop’ again in my lower back. The really scary thing about this injury is that nothing felt heavy or strained, it just let go. For about a year my left leg felt like it was about an inch shorter than my right. It was on par with Tony Ferguson’s ‘I don’t have a strength coach’ spine shredding deadlift HERE.

It goes without saying that form is paramount in my mind when performing deadlifts of any sort.

Most of my lifting-life I’ve shorted military pressing, now’s the time to catch up.

Feeling strong coming into the program. The COVID ‘shelter in place’ has left me lifting a lot. I’ve been using set/rep schemes from Dan John and Pavel. Lots of sets with high weight, relatively low reps and quite a bit of rest between sets. 7 sets of 3, 5 sets of 2, 5×5 were all common and oft used.

Just prior to starting Easy Strength, I set a hex bar deadlift PR(Personal Record) of 445lbs up from 405 pre-COVID.

KB military presses now feel good with 45’s in each hand. They are now my ‘working weight’ up from 35’s about a month ago. Haven’t done much of crap for rows/curls though. Those are extremely weak coming in.

Dan is right, this is too easy. Workout was about 30 minutes all in and most of that was loading/unloading the hex bar. I feel great after, despite being SMOKED from a heavy metcond of kettlebell complexes the day before.

Hex bar deadlifts improvement. 375lbs now feels like 325 did coming in. Heavy enough to take seriously, but just barely. I’ve been doing a meh job of warmups/warmdowns so I need to add these and focus on mobility. With work from home + family at home, time is oddly crunched. I’ve had a decent number of workouts with zero warmup, just a few reps of hex bar deadlift at each stage loading plates on the bar.

On better days I perform 2-3 sets of light hip thrusts to make sure my glutes are firing before getting to the deadlifts. This is key as for years I’d be ok squatting or deadlifting, then not be able to walk for the next few days.

A painful deadlift is a sign of hip dysfunction — Pavel

It was Nicholas Hopper of Universal Performance who diagnosed my chronic left TFL overactivation as a result of left glute disfunction. The crux was: That glute wasn’t firing so all the smaller stabilizers were going nuts trying to compensate. The TFL, QLs, adductors, and my entire hip complex would get bricked because 1/2 of the main engines weren’t doing their job.

With a few sets of Brent Contreras inspired weighted hips thrusts prior to lifting, my hips feel A-ok after. This alone is major progress for me.

Hex bar deadlifting requires a lot of schlepping weight around the garage. KB presses are now with 55s and feel pretty good. Some days the 55s are heavy, some days they move easily. Sticking with 55s for now, as the next jump in my wunder-garage is a 70lb kb. That’s a big jump. The loaded carries are money. I feel I’m getting a lot of benefit from the one handed farmers carry in particular. My core feels more stable than it has in years. I’ve been mixing KB swings and farmers carries throughout the first 15 workouts.

Workout 18/40 checkin, progress seems too quick at this point

To get my 10 reps of hex bar deadlift today, I’m doing sets of 5, 3, 2 reps and increasing weight between sets.

Top set is 2 reps at my pre Easy Strength best of 445lbs. 445 felt about like 395 at the start of the program. Heavy, but everyday liftable and no doubt it was going to move. Unlike my pre EZ strength PR of 445, these reps were smooth and heavy-but-easy.  Self eval, I think I have a lot more in the tank.

Looking ahead, workout 22 is the day before my 49th birthday and might be worth the stretch to 500.

I wake jazzed and nervous. I’m not worried about failing the lift, but am concerned with injuring myself. Taking myself out of action for another 12-18 months with self-inflicted injury doesn’t seem like a great plan. My core feels good though, and nothing about this workout program so far has had much strain. I have never missed a rep so far.

Planned: 6 sets of singles for the days lift, possible strength program target of 500.

To maximize top end, I’m taking 2-6 minutes rest between sets of one rep(singles).

Fuckall heavy. It moved, it locked out, I reached my goal. 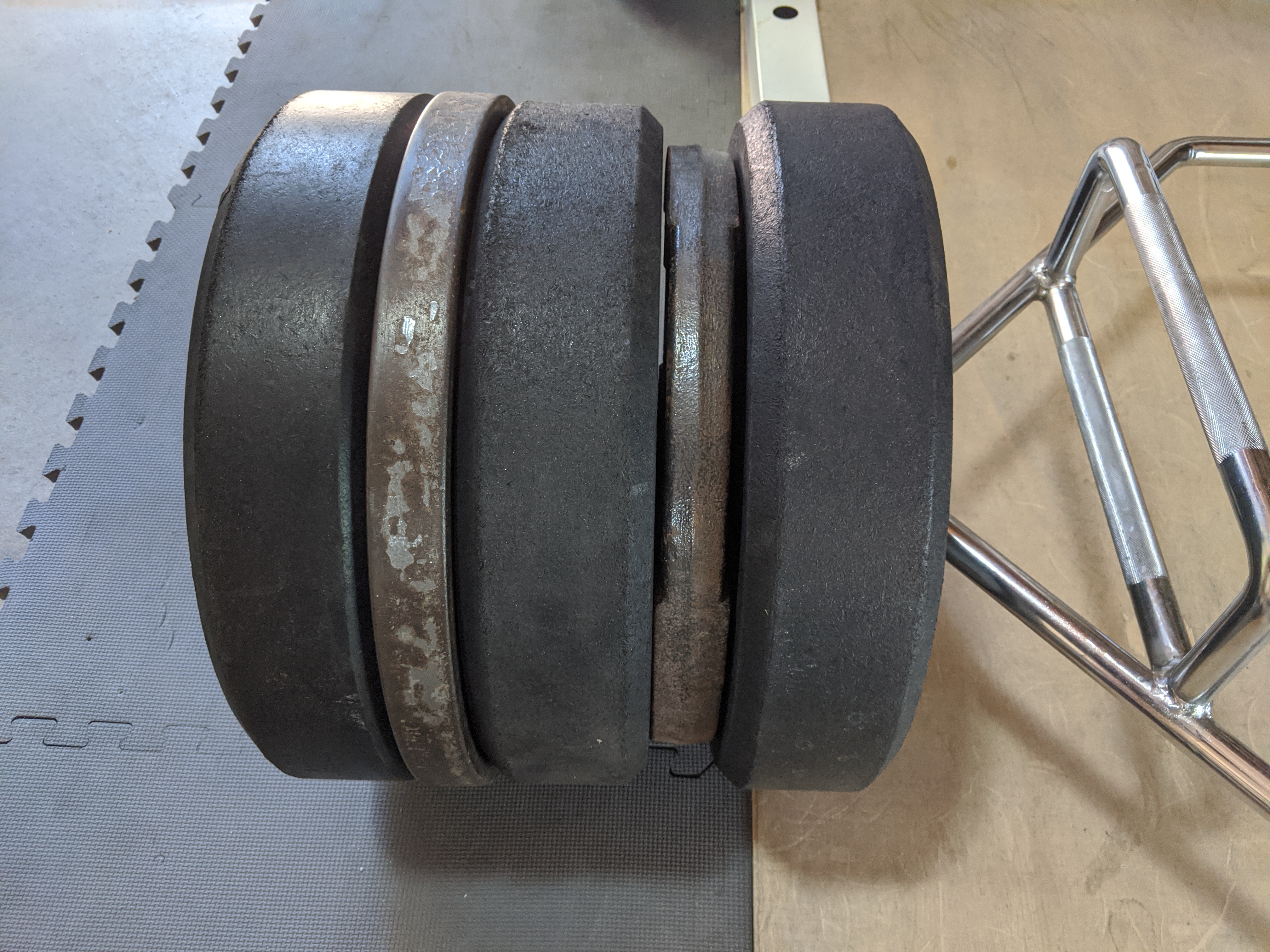 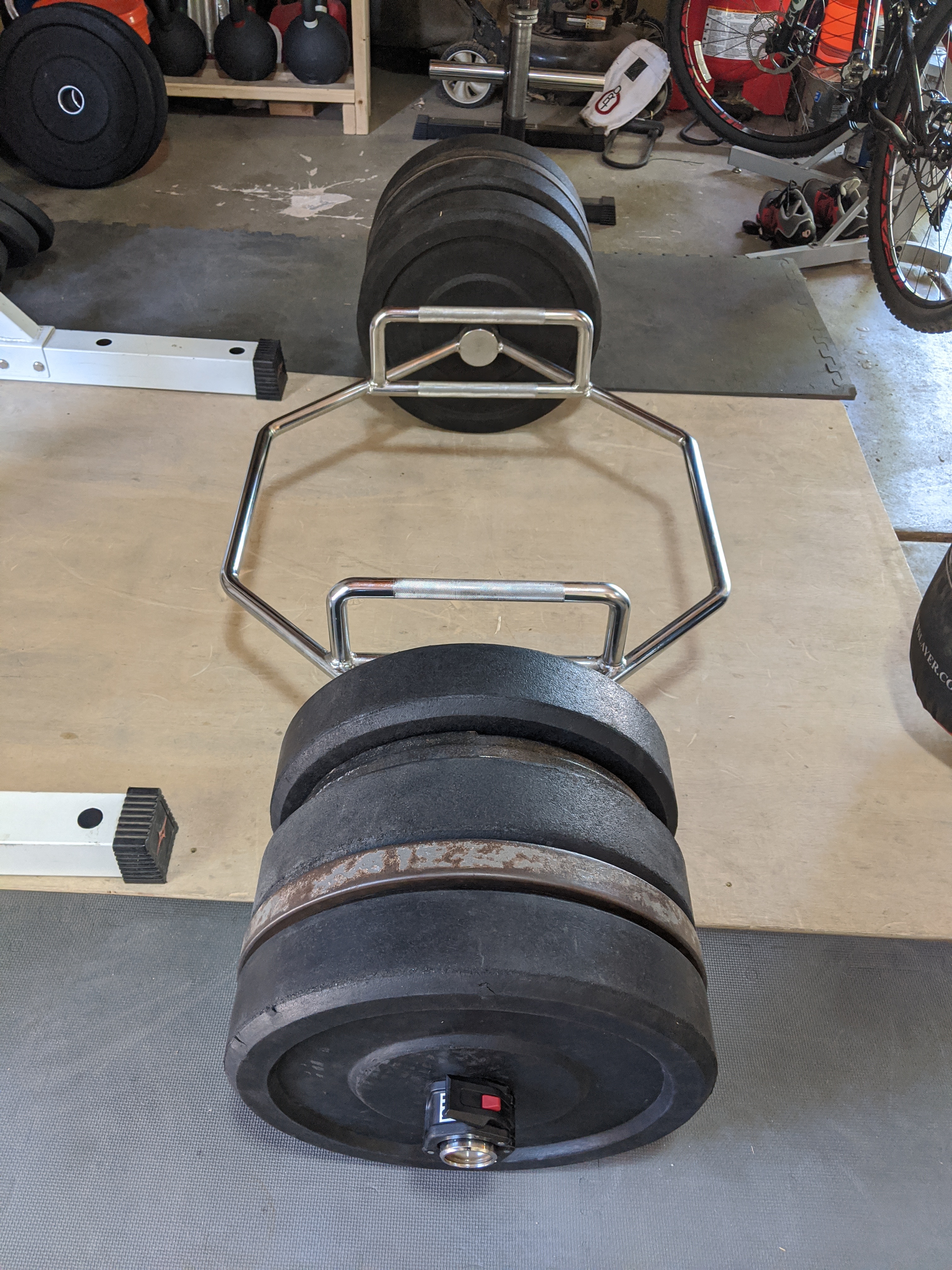 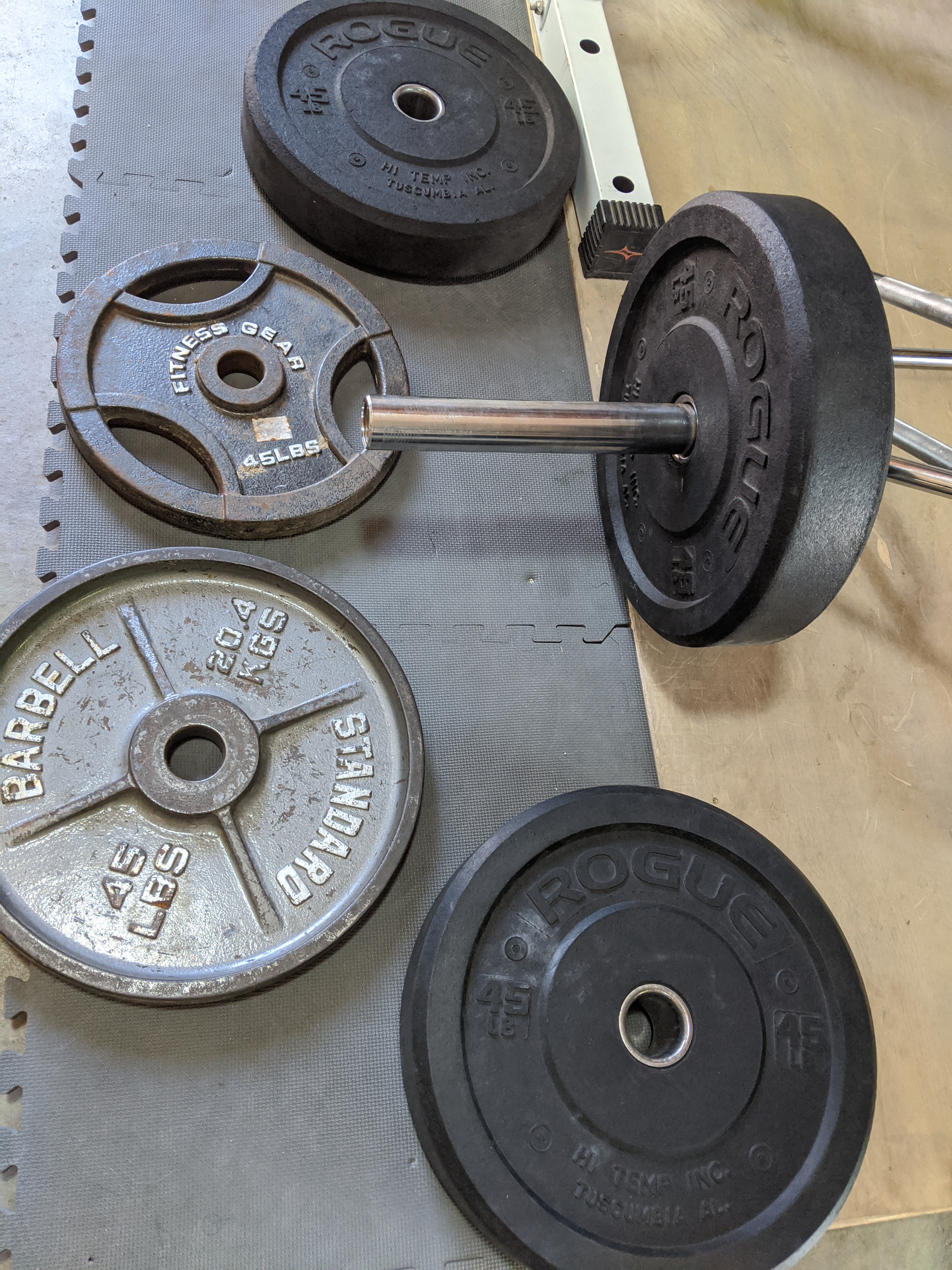 Because “This thread is useless without pics” or in this case videos. They are not exciting but here are the singles:

Odd observation, deadlifts in the 85%+ of max range have a strangely exciting effect on my central nervous system. I have that just did a quad espresso feel for hours afterword, and a significant mood elevating effect as well.

During the Easy Strength cycle, I mostly neglected cardio, and with the stay-at-home, drink-at-home, I’ve had enough beers to end up a bit fluffy.

Decided to mix in some metcond/cardio workouts as well as more mobility.

Every Set and Rep of my Easy Strength experiment

This program is a triumph of consistency over intensity. I never felt like blacking out, was not overly sore. Just punch the clock and lift the weights 5 days a week for 10 reps in each exercise category. This is the exact opposite of many programs who have a ‘if your hands aren’t bleeding you’re not doing it right’ mantra.

The loaded carries might be some of the best core work I’ve ever done. I had special love/hate of the one handed farmers carries as they targeted my obliques and QLs which were somewhat neglected and crucial to core stability.

My first non-ez strength workout after the program had bench press, squats, and chin ups which I hadn’t done in months. I planned a light day in all lifts, then started lifting. Holy crap I’m strong. Despite not doing those lifts, I was at pre-program numbers for my lifts and things felt lighter than they did before.

This program rocks, I will certainly do it again using Dan’s ‘same but different’ for the exercise selection.

There is strong magic in the Easy Strength program

For many lifetime’s worth of training knowledge, I highly recommend the Easy Strength book by Pavel and Dan John. If there is a criticism of this work it is that it is too expansive covering many many areas related to strength/size and power training. Link to Easy Strength Book on Amazon